This article is about Peter Parker. For the other heroes named Spider-Man, see Spider-Man 2099 or Miles Morales

Peter Parker, AKA Spider-Man, is a superhero from Marvel Comics. He appeared in the 23rd episode of DEATH BATTLE!, Batman VS Spider-Man, where he fought against Batman from DC Comics.

Peter Parker was orphaned at a very young age, and was constantly bullied as he grew up as a fiercely intelligent boy in high school. But then, he got bit by a radioactive spider when on a field trip, giving him superhuman abilities. He at first used them for personal gain, but when a criminal that Peter lets escape kills his beloved Uncle Ben, Peter then learns that with great power comes great responsibility, and dedicated the rest of his life to helping people as the heroic "Spider-Man".

Peter B. Parker from Spider-Man: Into the Spiderverse makes a small cameo appearance in the fundraising scene in Deadpool VS Mask, where he can be seen losing a game of cards and dice against Deadpool and The Mask and being mad at losing money.

Spider-Man appears on a photo in the background of Winter Soldier VS Red Hood.

Spider-Man appeared in Season 1 of DBX, where he fought against Mikasa Ackerman from the Attack on Titan series and lost.

He later made a cameo in the Season 3 episode, Batman VS Scorpion, as Batman wondered who could have killed Bane.

Spider-Man appeared in the Season 6 Bonus Episode of One Minute Melee, where he fought against Ruby Rose from the RWBY series and won. He ended up chasing down Frank West, who took pictures of his fight and made it look like he beat up a civilian. 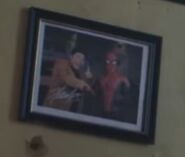 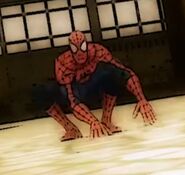 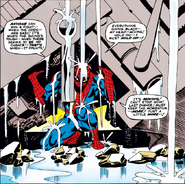 Spider-Sense
Add a photo to this gallery

Retrieved from "https://deathbattle.fandom.com/wiki/Spider-Man?oldid=1082035"
Community content is available under CC-BY-SA unless otherwise noted.