Spyro the Dragon is the main protagonist of the Spyro series. He appeared in the 91st episode of DEATH BATTLE!, Crash VS Spyro, where he fought against Crash Bandicoot from the series of the same name.

Spyro was born during peaceful times, growing up together with his best friend Sparx the Dragonfly. However, the peace didn't last forever. During their first adventure, Spyro and Sparx were the only ones not affected by Gnasty Gnorc's evil magic, causing them to be the only ones left who were able to stop him. After successfully defeating Gnasty and having every dragon in the Dragon Realms unfrozen, Spyro and Sparx went on to save countless other realms whenever they were needed. 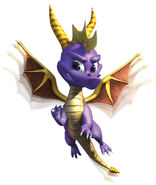 Dark Spyro
Add a photo to this gallery

Retrieved from "https://deathbattle.fandom.com/wiki/Spyro_the_Dragon?oldid=1009620"
Community content is available under CC-BY-SA unless otherwise noted.