This article is about the Mega Man from the Mega Man Star Force series. For other Mega Men, see Classic Mega Man, Mega Man X, Mega Man Volnutt or MegaMan.EXE

Geo Stelar and Omega-Xis, AKA Mega Man, are the main protagonists of the Mega Man Star Force series. To differentiate him from his classic counterpart, he is commonly referred to as Star Force Mega Man. He appeared in the 105th episode of DEATH BATTLE!, Mega Man Battle Royale, where he fought against fellow Mega Men, Classic Mega Man, Mega Man X, Mega Man Volnutt and MegaMan.EXE.

In the year 220X, where EM (Electro-Magnetic) technology has become the basis for human society, 5th-grade student Geo Stelar lives in the small town of Echo Ridge as a shut-in, following the disappearance of his father, Kelvin Stelar, during a mission on the Space Station "Peace".

One night, while stargazing, Geo encounters an EM being named Omega-Xis, who has fled from Planet FM after betraying his fellow FM-ians, who are plotting to invade Earth. In order to fight back against the invaders, as well as other threats in Echo Ridge and beyond, Geo and Omega-Xis combine to become Mega Man Star Force. 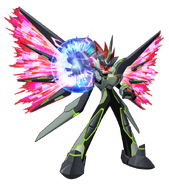 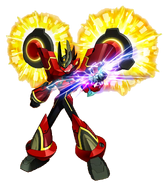 Battle Cards
Add a photo to this gallery

Retrieved from "https://deathbattle.fandom.com/wiki/Star_Force_Mega_Man?oldid=1074138"
Community content is available under CC-BY-SA unless otherwise noted.