Starscream is an antagonist from the Transformers series. He appeared in the 17th episode of DEATH BATTLE!, Starscream VS Rainbow Dash, where he fought against Rainbow Dash from the My Little Pony: Friendship is Magic series.

Starscream is a transformer, a large, humanoid robot that can transform into a piece of equipment or a vehicle, from the far away mechanical planet, Cybertron. He is the second-in-command and air commander of the tyrannic Decepticons against the heroic Autobots, lead by Optimus Prime.

Starscream always wanted to be the leader of the Decepticons, plotting against his leader, Megatron, trying to shoot him in his back, and blatantly states to Megatron's face that he will one day overtake him. Only Primus knows why Megatron still keeps him around.

After a struggle with the Autobots, this ultimately led the two autonomous armies to Earth, where they continued their battle and Starscream continues his quest for his self proclaimed "destiny".

Starscream makes a small cameo alongside Rainbow Dash during Deadpool VS Pinkie Pie, after Deadpool and Pinkie Pie entered YouTube, as both of them can be seen in the thumbnail for their episode. 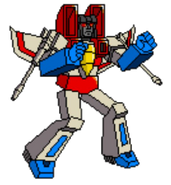 Starscream as a jet

M61A1 Vulcan Gatling Gun
Add a photo to this gallery

Retrieved from "https://deathbattle.fandom.com/wiki/Starscream?oldid=1129126"
Community content is available under CC-BY-SA unless otherwise noted.