Alex Mai
You insolent demon, how blind you are! You may think I’m small, but I can grow easily enough. You may think I’m unarmed, but I could pull the moon down from the sky with my two hands. Don’t worry, old Sun Wukong will sock you one!

Sun Wukong is a Chinese mythological figure and the main protagonist of the Journey to the West series*. He appeared in the 162nd episode of Death Battle, Hercules VS Sun Wukong, where he fought against Hercules from Greek and Roman mythology.

Long ago, a stone monkey was born from a magic rock on the Mountain of Flowers and Fruit and subsequently became king of the monkeys through a test of bravery. The Monkey King later sailed the world for ten years looking for a divine master to teach him the secret of eternal life, eventually becoming a disciple of the Buddho-Daoist sage, Patriarch Subodhi, who gave him the religious name Sun Wukong (孫悟空, "Monkey Awakened to Emptiness"). Under the sage's tutelage, Wukong mastered Daoist elixir arts resulting in his immortality, as well as the 72 Transformations, flight via the Cloud-Somersault, martial arts, general magic, and medicine. The Monkey King was later reported to the Jade Emperor by the Dragon King for bullying him into giving the immortal a magic weapon, the nine-ton Ruyi jingu bang (如意金箍棒, "As-You-Will Gold-Banded Staff") and a suit of armor; he was also reported by the King of Hell for inking out Wukong's name, as well as those of all primates on earth, from the book of life and death.

But the Jade Emperor was instead convinced to placate Wukong by offering him jobs as the Keeper of the Heavenly Stables and (later after rebelling) Guardian of the Immortal Peach Groves. But he rebelled once more when he learned of his low rank, leading to a great battle with heaven. After being subdued with difficulty, however, he easily survived execution due to his diamond hard body, and upon rebelling a final time, the Jade Emperor called on the Buddha to end his rampage. The Buddha imprisoned the Monkey King beneath a magic mountain to reflect on his actions. Six hundred-plus years later, Guanyin offered Wukong freedom in exchange for protecting the monk Tang Sanzang on his quest to collect the Buddhist sutras. Along the way, he and his religious brothers, Zhu Bajie and Sha Wujing, fought untold numbers of ghosts, monsters, and demons. In the end, he achieved Buddahood. 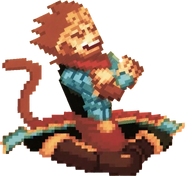 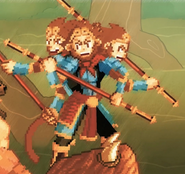 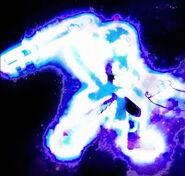 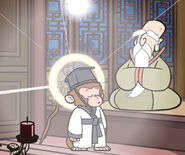 Immortality
(Image from the Little Fox Journey to the West series)

Body Outside the Body, a.k.a. Hair Cloning
(Image from Lego Monkie Kid)

The Multitude of Celestial Killers, a.k.a. 72 Transformations

Method of Modeling Heaven on Earth, a.k.a. Giant Cosmic Form
(Image from Chen Huiguan's Newly Illustrated and Complete Journey to the West)

Invulnerability
(Image from Journey to the West: Conquering the Demons) 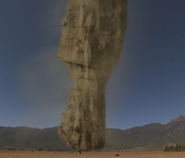