Marcus "Needles" Kane, AKA Sweet Tooth, is the main protagonist of the Twisted Metal series. He appeared in the 62nd episode of DEATH BATTLE!, Joker VS Sweet Tooth, where he fought against The Joker from DC Comics.

Though his backstory and motivation has varied from various games in the Twisted Metal series, one thing has remained consistent. Marcus "Needles" Kane was a psychotic serial killer who loved what he did: kill people while dressed as a clown with a machete or his iconic combat ice cream truck, the "Sweet Tooth" while competing in various Twisted Metal tournaments to get one wish from Calypso. 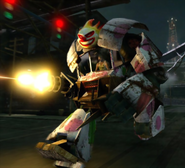 Sweet Tooth's mask
Add a photo to this gallery

Retrieved from "https://deathbattle.fandom.com/wiki/Sweet_Tooth?oldid=1048837"
Community content is available under CC-BY-SA unless otherwise noted.