Tyler-Johnson Garret, AKA TJ Combo, is a protagonist from the Killer Instinct series. He appeared in the 81st episode of DEATH BATTLE!, Balrog VS TJ Combo, where he fought against Balrog from the Street Fighter series. He was voiced by Gabriel Kunda.

Tyler-Johnson Garret worked his way up from a shabby backstreet gym to the heavyweight champion of the world for several years. However, he lost his title and all his fame, wealth and respect when the Ultratech surgeon that gave him titanium arm implants, to insure that Combo remained the champion, revealed TJ's secret after he refused to throw his fight against Fulgore.

Determined to regain fame and glory, TJ striped himself of his cybernetic implants and joined the Killer Instinct tournament hosted by Ultratech. There, he got hospitalized after barely killing Riptor and, after his release from the hospital, swore vengeance against Ultratech. 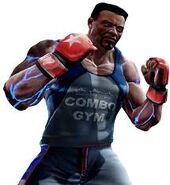 Berserker mode
Add a photo to this gallery