Taichi "Tai" Kamiya is one of the main protagonists of the Digimon series. He and his Agumon appeared in the 57th episode and Season 2 Finale of DEATH BATTLE!, Pokémon VS Digimon, where they fought against Red and his Charizard from the Pokémon series.

One night in 1995, a Digi-Egg appeared in front of the young Tai Kamiya and his little sister Kari, which would eventually hatch into a Botamon, who quickly digivolves into a Koromon. The two kids soon became friends with the small Digimon and it digivolved again into a large Agumon. Not long after this, a Parrotmon appeared, and Agumon was forced to protect his new friends by digivolving into a Greymon, with the fight ending in both of their destruction.

Some time after this during summer camp, Tai and six of his friends found mysterious devices in the snow, which transported them into the Digital World. There, Tai meets Koromon again, but both lacked any memory of their previous encounter, yet both still became friends and partners. During their journey through the Digital World, Tai, his partner and their friends gained the power to defeat any evil via the power of trust and friendship. 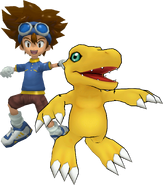 Crest of Courage
Add a photo to this gallery

Retrieved from "https://deathbattle.fandom.com/wiki/Tai?oldid=1009602"
Community content is available under CC-BY-SA unless otherwise noted.