The Guardian of the Kaka Tribe

Taokaka is a protagonist from the BlazBlue series. She appeared in the 9th episode of DEATH BATTLE!, Felicia VS Taokaka, where she fought against Felicia from the Darkstalkers series.

Taokaka is a member of the Kaka Clan, a group of genetically engineered catlike humanoids intended to be used as living weapons. She is the clan's guardian, and one of the strongest in the group. Taokaka works as a bounty hunter and intends to receive money for her family.

However, she is easily distracted. Her ditzy nature has lead to some bounties escaping more than once, and while she was hunting for Ragna the Bloodedge, she was hungry, so Ragna bought her some food and Taokaka completely forgot about the bounty, quickly becoming friends with Ragna. 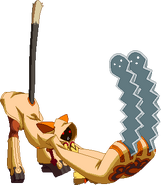 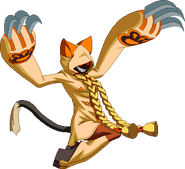 Imma Beat The Crap Outta You 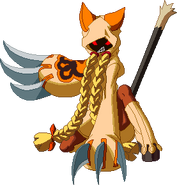 Attack Meow Pow
Add a photo to this gallery

Retrieved from "https://deathbattle.fandom.com/wiki/Taokaka?oldid=1146577"
Community content is available under CC-BY-SA unless otherwise noted.