Tatsumaki is a protagonist from the One-Punch Man series. She appeared in the 117th episode of DEATH BATTLE!, Mob VS Tatsumaki, where she fought against Mob from the Mob Psycho 100 series.

Tatsumaki was born with incredible psychic abilities. Her blossoming powers eventually led to her being taken away from her adopted family at the age of seven by scientists interested in studying her abilities, as her parents were given money for complying. Her extraordinary esper abilities were tested by the scientists, who rewarded her with candy and toys for cooperation but denied her from witnessing the outside world. Moreover, she was kept locked up in a cell whenever she wouldn't use her powers. When she was 10, a monster outbreak occurred while she was still locked in her cell, leaving her alone to fend off the monster. Luckily, the Rank 1 S-Class Hero named Blast managed to come to Tatsumaki's rescue, and she was inspired by him to become a hero. As a result of this experience, she ended up joining the Hero Association when she was older, eventually earning the title of Rank 2 S-Class Hero.

Tatsumaki appeared in Season 5 of One Minute Melee, where she fought against her DEATH BATTLE! opponent Mob and lost. 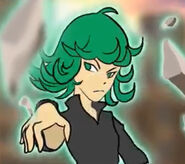 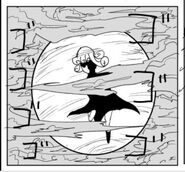 Retrieved from "https://deathbattle.fandom.com/wiki/Tatsumaki?oldid=1082168"
Community content is available under CC-BY-SA unless otherwise noted.