Dione, AKA Thanos, is a supervillain from Marvel Comics. He appeared in the 103rd episode and Season 5 Finale of DEATH BATTLE!, Thanos VS Darkseid, where he fought against Darkseid from DC Comics. He was voiced by Justice Washington.

Thanos is one of the last sons of the Titanian Eternals A'Lars and Sui-San, slaughtering his own people can becoming known among the galactic communities as the "Mad Titan." Motivated by his ambition and obsession for death, Thanos becomes cosmic warlord who rules over a distant region of space called Acheron. His ultimate goal is the possession of the Infinity Gems so he can impress the cosmic being, Mistress Death by rewriting existence itself.

Thanos makes a small cameo appearance during the fundraising scene in Deadpool VS Mask, as Deadpool can be seen playing as Thanos in a Fortnite livestream. 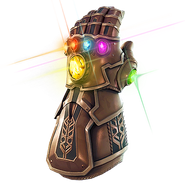 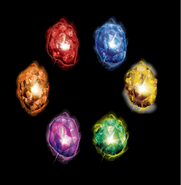 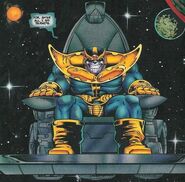 Thanoscopter
Add a photo to this gallery