Bruce Banner, AKA The Hulk, is a superhero from Marvel Comics. He appeared in the 69th episode of DEATH BATTLE!, Hulk VS Doomsday, where he fought against Doomsday from DC Comics.

Doctor Bruce Banner was a reclusive scientist until the U.S. Military recruited him based on his studies on gamma radiation. When testing the Gamma Bomb, Banner noticed teenager Rick Jones driving into the testing grounds on a dare. Banner went and got Jones out, but the bomb went off and Banner absorbed the gamma radiation.

He came out fine from the explosion, but his DNA was altered from the gamma radiation. Now, whenever Bruce is under a lot of stress (usually anger) he transforms into the Incredible Hulk, a large, green monstrous being that's not afraid to smash anything in his way.

Because of the Hulk's destructive nature, he was seen as a threat to humanity and was hunted by the military for years, complicating Bruce's life. The Hulk, however, managed to prove himself a hero when he became a part of the Avengers, one of the team's founding and strongest members.

Hulk makes a small cameo alongside Doomsday and Doctor Strange during Deadpool VS Pinkie Pie, after Deadpool and Pinkie Pie entered YouTube, as they can be seen in the thumbnail for the second episode of DEATH BATTLE! Cast "Hulk & Doomsday Get Strange".

Hulk made a brief appearance in the April Fools One Minute Melee, Goku vs Sonic?, where he and the other Avengers fought Goku from the Dragon Ball series. After Hulk accidentally knocks Thor into the ground, Goku blasted him into space.

He appeared in Season 4 of One Minute Melee, where he fought against Broly from the Dragon Ball series and lost.

Hulk appeared in Season 3 of DBX, where he fought against fellow Marvel brute The Juggernaut and won. 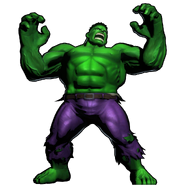 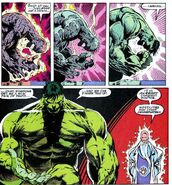 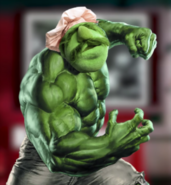 Retrieved from "https://deathbattle.fandom.com/wiki/The_Hulk?oldid=1063515"
Community content is available under CC-BY-SA unless otherwise noted.