The Joker is a supervillain from DC Comics. He appeared in the 62nd episode of DEATH BATTLE!, Joker VS Sweet Tooth, where he fought against Sweet Tooth from the Twisted Metal series.

While the Joker's true identity is unknown, the general accepted origin for him was told in The Killing Joke, where it was revealed that he was a man down on his luck who joined a group of criminals robbing ACE Chemicals. He was forced by them to disguise himself as the infamous Red Hood. During the raid, he encountered the vigilante Batman and jumped into a vat of chemicals to escape. While he avoided capture, the chemicals permanently bleached his skin white, lips red, and hair green, giving him the appearance of a clown. Driven insane by "one bad day," the man becomes the Joker, the greatest foe the Caped Crusader has ever faced.

As the Clown Prince of Crime, the Joker's been responsible for causing chaos and tragedy within the Dark Knight's life, such as the death of Jason Todd, the paralysis of Barbara Gordon, and forcing Batman to confront his inner demons.

Note: These are the voices in Red Hood's head.

The Joker made a cameo in Winter Soldier VS Red Hood, where he could be heard as a voice in Jason's head while he's getting hit by Bucky with a crowbar, reflecting the nightmare of the day the Joker murdered the former Robin.

The Jokermobile as it appears in Batman Arkham Knight 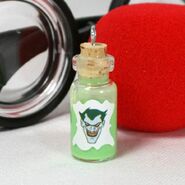 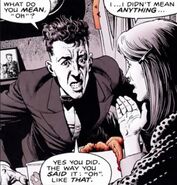 Retrieved from "https://deathbattle.fandom.com/wiki/The_Joker?oldid=1082033"
Community content is available under CC-BY-SA unless otherwise noted.