Stanley Ipkiss, AKA The Mask, is the main protagonist of the series of the same name. He appeared in the 118th episode of DEATH BATTLE!, Deadpool VS Mask, where he fought against Deadpool from Marvel Comics.

In an antique shop, a weak, neurotic man named Stanley Ipkiss shops for a gift for his girlfriend, Kathy. At the store, he purchases an old jade mask that begins to talk to him. When Stanley wears it, he is transformed into a wacky superpowered being with an abnormally large, bald, green-skinned head and a mouthful of huge teeth. After exploring his new abilities, Ipkiss goes on a rampage, taking revenge on those whom he has a grudge on. Because of this, he earned the nickname "Big Head". 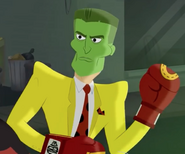 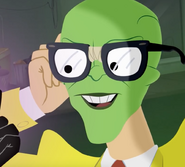 The Mask impersonating a stereotypical nerd 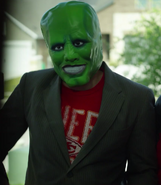 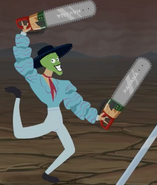 The Mask in his samba "Cuban Pete" outfit 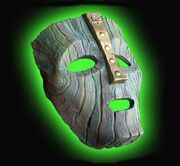 The Mask of Loki 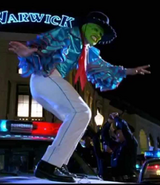 The Mask transforming a balloon into a Tommy gun

Regeneration
Add a photo to this gallery

Retrieved from "https://deathbattle.fandom.com/wiki/The_Mask?oldid=1082181"
Community content is available under CC-BY-SA unless otherwise noted.