Agent Maine, AKA The Meta, is an antagonist from the Red vs. Blue series. He appeared in the 64th episode of DEATH BATTLE!, Meta VS Carolina, where he fought against fellow former Freelancer Agent Carolina. He was voiced by Matt Hullum and Burnie Burns, while his A.I.s were voiced by Miles Luna and Alena Lecorchick.

The Meta, formerly known as Agent Maine, was a member of Project Freelancer who was one of the best field agents thanks to his brute strength. When he lost his voice during a mission, Carolina gave him her A.I. Sigma as a way to communicate. However, Sigma's desire to become "Meta-stable" had him manipulate Maine into hunting down his fellow Freelancer partners, and take their A.I.'s to attain perfection. But after an EMP blast that destroyed all A.I.'s in his head, The Meta became more brutish with one goal in mind, power.

Meta makes a small cameo alongside Agent Carolina during Deadpool VS Pinkie Pie, after Deadpool and Pinkie Pie entered YouTube, as both of them can be seen in the thumbnail for their episode.

Note: These are the A.I.s quotes.

Agent Maine killing a soldier in a single punch 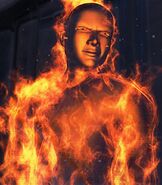 Sigma
Add a photo to this gallery