Oroku Saki, AKA The Shredder, is the main antagonist of the Teenage Mutant Ninja Turtles series. He appeared in the 82nd episode of DEATH BATTLE!, Shredder VS Silver Samurai, where he fought against Silver Samurai from Marvel Comics.

The Shredder is a title held by many throughout the TMNT multiverse, but the main Shredder has always been Oroku Saki. He and Hamato Yoshi were often times friends, but jealousy, either because Yoshi seemed to be a better leader than Saki or because the love of Saki's life loved Yoshi, lead him to attack Yoshi and force him to go to New York City.

Saki would then rise up in the ranks of the Foot Clan and attempt to finally get rid of Hamato Yoshi. This attempt at killing Yoshi would often times either mutate him or turn his pet rat into Splinter, and would simultaneously create Shredder's ultimate nemesis, the Teenage Mutant Ninja Turtles. 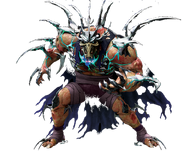 Super Shredder
Add a photo to this gallery

Retrieved from "https://deathbattle.fandom.com/wiki/The_Shredder?oldid=1074140"
Community content is available under CC-BY-SA unless otherwise noted.