The Terminator (serial number T-850) was created by Skynet in order to combat against the human resistance. One of it's main functions is to blend in with humans thanks to real life skin tissues surrounding it's endo-skeleton, perfect for sneaking into human bases.

A few were sent back in time for one simple target; John Conner, the leader of the resistance. But while one was sent to kill his mother Sarah Conner in 1984, two were reprogrammed by the resistance in order to protect John from enemy terminators, such as the T-1000 and the T-X. 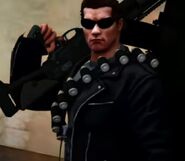 The full body of Terminator's endoskeleton 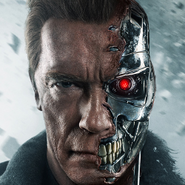 Retrieved from "https://deathbattle.fandom.com/wiki/The_Terminator?oldid=1026367"
Community content is available under CC-BY-SA unless otherwise noted.