Thor Odinson is the god of thunder from Asgard and is the son of the All-Father Odin. In order to teach his son humility, Odin briefly banished Thor to Earth in a human body by the name of Donald Blake. After regaining his powers, Thor dedicated most of his time to protecting the citizens of Earth, and eventually founded the famous superhero team known as the Avengers with Iron Man, Hulk, Ant-Man, and the Wasp. He would battle many times with his arch-nemesis, his adoptive brother Loki.

Animators who wanted to audition for DEATH BATTLE! had to create a short fight between Thor and Kratos from God of War. All the fights ended with Thor decapitating Kratos with Mjolnir.

Thor had a cameo in the Goku vs Sonic? April Fools One Minute Melee, where he and the other Avengers tried to fight Goku from Dragon Ball. Unlike the other combatants, Thor isn't defeated by Goku, but rather accidentally knocked out by Hulk when Goku evades his and Hulk's ambush.

He later appeared in a Bonus Episode in Season 5, where he fought against Vegeta from the Dragon Ball series and lost.

Thor appeared in Season 3 of DBX, where he fought against 100 wild Pikachu from the Pokémon series and won.

He returned for the Season 5 Premiere, where he fought against Vegeta from the Dragon Ball series and won.

Sprite used in DEATH BATTLE!, DBX and One Minute Melee 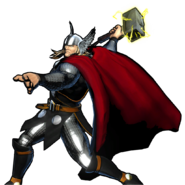 Meging Jord being carried to Thor

Warrior's Madness
Add a photo to this gallery

Retrieved from "https://deathbattle.fandom.com/wiki/Thor?oldid=1080502"
Community content is available under CC-BY-SA unless otherwise noted.