Toph Beifong is one of the main protagonists of the Avatar: The Last Airbender series. She appeared in the 42nd episode of DEATH BATTLE!, Gaara VS Toph, where she fought against Gaara from the Naruto series.

Toph Beifong was born into the wealthy Beifong family. However, she was born a blind child. Her parents became extremely overprotective of her. One day when she was 6 years old, Toph ran away, upset that she was essentially trapped in a cage. She went into a cave and met some badgermoles. She took a liking to them, as they were also blind, and learned to Earthbend from their ways by "seeing" with her other senses and her "seismic sense" where she senses the every vibrations in the ground to know where everything is. She eventually returned to her home, and because she had left unannounced and by herself, her parents put a tighter leash on her and didn't even permit her to leave the house. Years later, she would constantly sneak out and compete in bending tournaments under the alias "The Blind Bandit". One day, she met Aang, the Avatar, and his friends Katara and Sokka. After Toph helped them defeat some criminals, she revealed to her parents her bending skills and they put an even tighter leash on her. Not being able to stand the overprotection any longer, Toph joined Aang on his journey and taught him Earthbending.

Toph can be seen during Deadpool VS Mask in one of the alternate realities that was shown in the background when Deadpool was using the Continuity Gem. However, instead of getting killed by her opponent like the rest of the cameos, the scene ends before her fate is shown.

Toph appeared in the Season 6 Premiere of One Minute Melee, where she fought against Terra from DC Comics (more specifically, the version from the Teen Titans cartoon series) and won. 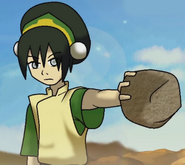 Mudbending
Add a photo to this gallery

Retrieved from "https://deathbattle.fandom.com/wiki/Toph_Beifong?oldid=1073529"
Community content is available under CC-BY-SA unless otherwise noted.