Lena Oxton, AKA Tracer, is one of the main protagonists of the Overwatch series. She appeared in the 66th episode of DEATH BATTLE!, Tracer VS Scout where she fought against The Scout from the Team Fortress series.

At the age of 26, Lena Oxton (call sign: Tracer) was the youngest ever inductee to Overwatch's experimental flight program. Since she was so fearless, she volunteered to test the Slipstream, a prototype fighter jet with the ability to teleport itself. Unfortunately, the Slipstream's teleportation matrix malfunctioned on its first test flight, and it never reappeared.

Lena was presumed dead until a ghostly apparition of her began appearing over the next couple of months. It turned out that the Slipstream had caused her to become detached from our timeline, and she could only appear in our world for brief periods as a ghost.

Finally, a scientist named Winston managed to invent and equip her with a chronal accelerator, a device capable of anchoring her to the present. In addition, it gave her the ability to control her own time, speeding or slowing it down at will. 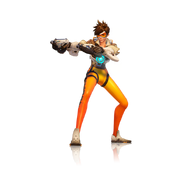 Tracer with her Pulse Pistols

Tracer’s Recall Ability
Add a photo to this gallery

Retrieved from "https://deathbattle.fandom.com/wiki/Tracer?oldid=1082172"
Community content is available under CC-BY-SA unless otherwise noted.