Twilight Sparkle is one of the main protagonists of the My Little Pony: Friendship is Magic series. She appeared in the 89th episode of DEATH BATTLE!, Raven VS Twilight Sparkle, where she fought against Raven from DC Comics.

Twilight was just a normal unicorn until Princess Celestia saw great potential in her and took her on as an apprentice. For a long time Twi was shy and reclusive, focusing only on her studies but one day Celestia sent her to Ponyville to investigate Nightmare Moon's prophesied return. In Ponyville Twi met the other Mane 6 and with their help defeated the returned Princess of the night, from then on Twi was best friends with the Mane 6 and studied the Magic of Friendship. Twi eventually mastered the Magic of Friendship and ascended to Alicorn (and also a princess).

Twilight was seen at the end of Deadpool VS Pinkie Pie attending Deadpool's Birthday Party along with Pinkie Pie and the rest of the Mane 6 (with the exception of Rainbow Dash). 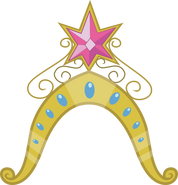 The Element of Magic 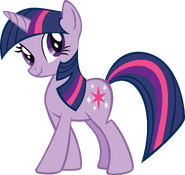 Twilight formerly as a Unicorn

Retrieved from "https://deathbattle.fandom.com/wiki/Twilight_Sparkle?oldid=1061432"
Community content is available under CC-BY-SA unless otherwise noted.