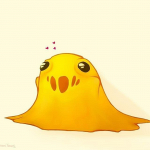 aka None of your damn business

I am the representation of Australia and a dumb nerd on the internet. I don't want to tell you much about me other than that I am Male and from Australia. I like Death Battle, Polandball, memes, Nintendo, Star Wars and Shonen Anime.

> Claims to have the powers of all Australians and Australian animals.

Retrieved from "https://deathbattle.fandom.com/wiki/User:AnAustralianPerson?oldid=957160"
Community content is available under CC-BY-SA unless otherwise noted.