Credit to the people who ripped and or posted the sprites I used in this.

Also, credit to Ultimate Mega Gamer for his awesome 5-man thumbnail template I used to make the thumbnail for this fight!

Wiz: OCs, many people have made them for fun.

Boomstick: The same could be said for people taking pre-existing characters and making them OP, or more OP if they already were.

Wiz: And Kyle, created by Yoshirocks92.

Boomstick: He also can easily go past light-speed.

Wiz: He can destroy omniverses, and thus withstand the destruction of them with minor damage.

He also is neither good or evil, he simply does whatever he feels like.

Boomstick: He can summon the Blue Falcon during fights to help him out.

Wiz: Although he has great power, however, he may have the strangest weakness we have ever heard of.

Boomstick: ... Piggy banks. But even with that strange weakness, nobody should ever mess with the flaming, Captain Falcon of destruction!

Captain Falcon: "Show me your moves"

Wiz: Clock has been alive for an eternity in the past, and lives today.

Wiz: Destroying galaxies is a piece of cake for him, and he can move at the speed of light. He has the ability to control time.

Boomstick: So he can warp time and time travel. He can even age people to death if he's in a really bad mood.

Wiz: XYZ, pronounced zizz, if the son of Z, the highest-ranked god in his universe.

Boomstick: As a demigod, he was pretty powerful.

Wiz: He eventually noticed corruption within the gods, so he took the sword that was given to him to protect himself to do good in the face of their evil. Once they figured out what he was doing, they were furious that he was purposely acting different than them. All of the gods grew a hatred for XYZ.

Boomstick: Even Z, his own father, wanted XYZ dead...damn.

Wiz: XYZ ended up fighting the gods, and for each one he killed, he gained a power unique to certain gods.

Boomstick: After taking out all of the normal gods, he had 16 different powers, including, but not limited to...

And after taking out Z in his final fight, he gained his 17th power, God Energy, making him a, well.. God...

Wiz: In this form he has limitless power, speed, and wisdom. He can also steal the immunities and powers his opponents have. Also, advantages against him get reversed.

However, he holds back a lot of power to make the fight somewhat fair. This has lead to him almost ending up killed in one of his fights. All in all, he's extremely kind, but when the time calls for it, he doesn't hold back, and can even get pretty mad under some circumstances.

Boomstick: If you ever see a yellow stick-man with a halo and wings, just be cool around him, or you might start something you can't finish.

Wiz: Yes, Pikachu. He can move at the speed of light, and can shoot one billion volt lighting.

Wiz: You thought that was it? While he's not nearly as strong physically, he has the ability to destroy 1 trillion hyperverses by staring extremely hard.

Boomstick: This OP lightning mouse will leave you feeling.. electrified.

Wiz: Kyle was born as a normal human. Everything was fine for him, and he had a girlfriend named Celica.

Wiz: Anyways, a being of darkness appeared seemingly out of nowhere and impaled Celica and cut off Kyle's right arm.

Boomstick: It then broke both of Kyle's legs and left him and his girlfriend to die, I mean what in the actual hell?

Wiz: He was saved by the gods of time and space, Ty Time and Ace Spacely. His legs were healed and he was given a new arm.

Boomstick: Kyle was also empowered with the Celestial Force, giving him many new ablilites and great power.

Wiz: He was told the only way he could save his girlfriend is to have her soul sealed into the Celestial Sword, which was given to him by Ty and Ace. After doing so, he went through intense training to become the greatest warrior he could be, as he was the chosen savior of Nintenga, the planet where all of this takes place.

Boomstick: To complete the training, he had to find the 8 Celestial Diamonds, which when found, get absorbed by the Celestial Sword transforming it into the True Celestial Sword, and making him a God.

Wiz: He is immune to time-related attacks, and can travel through time. He also does not age, meaning he can live forever.

Wiz: His sword can transform into the most recent weapon it saw, also enhancing the weapon to give him an edge.

Wiz: He has Rocket Boots as well, which he uses to kick bones to dust. Finally, he can summon the Celestial Jet for travelling and to help him in fights.

Kyle: "This is for Celica!"

Wiz: Alright, the combatants are set, let's end this debate once and for all.

Boomstick: It's time for a Death Battle!!!! 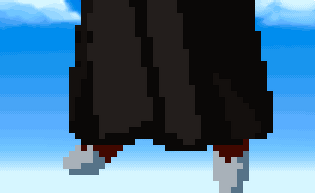 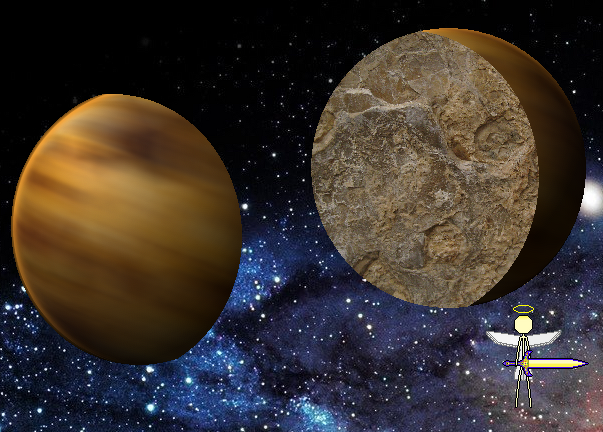 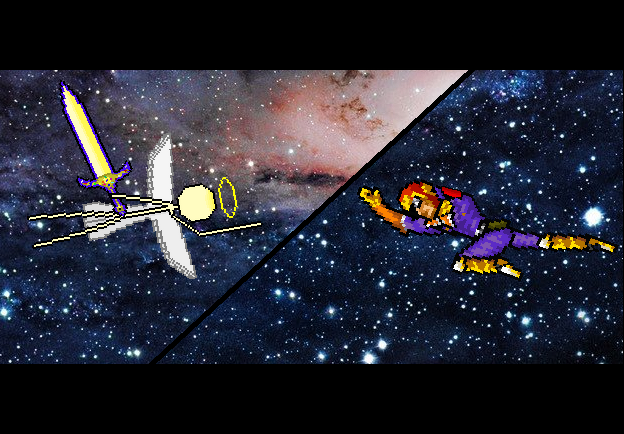 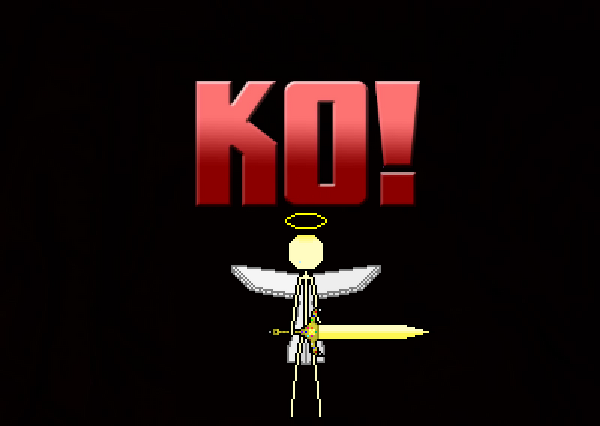 Wiz: XYZ winning was obvious since he had limitless power. But let's explain everything else first.

Wiz: However, since Clock is such a good time controller, and the fact that such an amount of destruction would take a few seconds to be fully unleashed, allowed Clock to travel back in time to kill Pikachu when he was much weaker, as a Pichu.

Boomstick: Aging Pikachu after the stare wouldn't work as it wouldn't reverse the effect of the stare.

Wiz: Now between Clock and Kyle, it's actually very difficult to decide who'd win. Clock is physically much more powerful, but Kyle has way more abilities and is immune to time manipulation, and also aging since he's immortal. It's likely that Clock would be very surprised by Kyle resisting his time control, and not know exactly how to react since he has not experienced that happening before. Once Kyle transformed into a God and had the True Celestial Sword, it's unlikely Clock would have lasted in the long run. But, both were capable of killing each other. It's really a matter of the circumstance here.

Boomstick: But with all of his abilities, Kyle still couldn't leave a mark on Captain Falcon as he casually destroys omniverses, something Kyle isn't even close to being capable of doing.

Ditto132: Okay, I can explain this. First off, I'm not biased against anyone else's characters. I know what you might be thinking. "Oh, of course Ditto's character wins, he's the person who wrote this in the first place!" No, I actually created this character over a year ago. I know I made him extremely overpowered, but I can also explain that. You see, after watching all these Death Battles, and watching videos and reading articles online about which fictional character would win in a fight, I build up a little bit of rage every time the character I wanted to win lost. Honestly, I got tired of it at one point, and decided to create a character that could never lose against any fictional character. He's a character who, created out of my "rage" is ironically very nice. You thought XYZ was OP? Well, he actually has a super form, but since I want my character to not lose, I won't tell you his powers. Just trust me, he can't lose to anyone, I'm pretty sure of it. Actually though, at the start of XYZ's story, he would get annihilated by a LOT of fictional characters, and wouldn't stand a chance in this battle royale. The point is, after witnessing the gods not acting morally, he took it into his own hands to do good to create a balance. Once he overthrew the gods, he became the last god, one of ultimate power and peace. He's not meant to lose at this point because it kinda contradicts his whole last god, only savior of the universe thing. I had second thoughts about including him in the battle royale in the first place, since I knew the other combatants couldn't win, so the fight is broken. Well, Kyle actually could have won since he could replicate the Uni-Blade and kill XYZ with it, but XYZ could dodge it effortlessly. Why did XYZ exploit Captain Falcon's weakness and not steal Kyle's Celestial Force? Because Kyle isn't an enviornmental threat in this fight, and XYZ wants to keep things fair. But when he saw Captain Falcon's power, he knew he had to stop holding back against him to save other omniverses from being destroyed by Cap.. Then again, it made the battle royale more epic including him, and it would be the biggest and best fight I've made here IMO. I also didn't want to potentially disappoint anyone by removing a character from the fight. So yeah, there's that.

Boomstick: Well there you have it, Pikachu was stunned at his loss, Clock's time was up, Kyle may have been immune to time manipulation, but not to his loss, and Captain Falcon was shown XYZ's moves.

Wiz: The winner is XYZ. 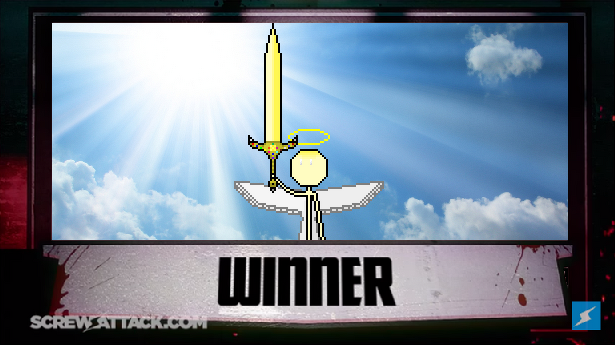 Boomstick: Next time on Death Battle...