Vegeta is one of the main protagonists of the Dragon Ball series. He appeared in the 12th episode of DEATH BATTLE!, Vegeta VS Shadow, where he fought against Shadow the Hedgehog from the Sonic the Hedgehog series.

Vegeta was the prince of the Saiyans, a group of dedicated warriors whose planet was destroyed and race was enslaved by Lord Frieza. Vegeta became one of Frieza's top soldiers, but after hearing about the Dragon Balls, he and his companion Nappa traveled to planet Earth to achieve immortality, but were stopped by Goku and his friends. Vegeta tried to gather the Dragon Balls once again on Namek, even allying himself with his former enemies, but ended up getting killed by Frieza. He was resurrected, and despite his rebellious attitude, he would start a life on Earth by marrying Bulma and having a son named Trunks. He defends the Earth with the Z-Fighters and is now a friendly rival to Goku.

Vegeta made a cameo before the battle in Goku VS Superman, where he and the rest of the Z-Fighters can be seen watching news about Superman at Kame House. He boasts that he could kill Superman faster than he killed Shadow and later makes an insulted comment after Goku insulted his pride. He was again voiced by Nick Landis.

Vegeta unofficially appeared in a joke battle, where he "fought" against Mewtwo from the Pokémon series. However, instead of actually fighting each other, both just ended up destroying Silvermania HQ and decided to drink a beer together. He was yet again voiced by Nick Landis.

Vegeta made a cameo during Trunks VS Silver, where he was fighting Shadow the Hedgehog offscreen and won. He also made a cameo in Cell VS Meruem and Gohan VS Superboy.

He appeared in a Bonus Episode in Season 4, where he fought against his DEATH BATTLE! opponent Shadow the Hedgehog and won. Nick Landis reprised his role.

He later reappeared for another Bonus Episode in Season 5, where he fought Thor from Marvel Comics and won.

Vegeta appeared in Season 2 of DBX, where he fought against General Zod from DC Comics and won. Nick Landis reprised his role once again.

He returned for the Season 5 Premiere, where he fought against Thor from Marvel Comics and lost.

Sprite used in Vegeta VS Mewtwo?

Sprite used in DBX Season 2 and One Minute Melee 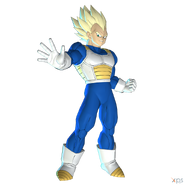 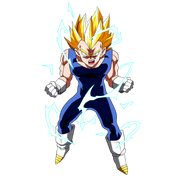 Big Bang Attack
Add a photo to this gallery

Retrieved from "https://deathbattle.fandom.com/wiki/Vegeta?oldid=1056604"
Community content is available under CC-BY-SA unless otherwise noted.