Edward "Eddie" Brock, AKA Venom, is a supervillain/anti-hero from Marvel Comics. He appeared in the 74th episode of DEATH BATTLE!, Venom VS Bane, where he fought against Bane from DC Comics. He will return for the 134th episode, Venom VS Crona, where he will fight against Crona from the Soul Eater series.

When an alien symbiote from outer space bonded with Spider-Man, it created a black suit which gave him incredible power. However, Peter soon learned that his suit was not only alive, but it also augmented his rage and sought to permanently bond with him, believing Peter to be its ideal host. Horrified by the experience, Spider-Man eventually discarded the symbiote.

Meanwhile, a down on his luck reporter, Eddie Brock, was contemplating suicide after losing his job at the Daily Globe when it was discovered that Brock had fabricated a news story about the identity of a serial killer named the Sin-Eater, who Spider-Man had brought to justice. Not only that, but he was also divorced from his wife, diagnosed with cancer, and disowned by his father.

After blaming Spider-Man for his misfortune, Eddie decided to go to a church to ask for forgiveness. Coincidentally, Peter was in that same church where he had the symbiote removed not long before Brock arrived. The symbiote, sensing Eddie's distress, bonded with him, and since they both shared a mutual hatred for Spider-Man, Brock and the symbiote swore vengeance on the friendly neighborhood web-slinger and became Venom, one of Spider-Man's greatest foes of all time. However, the two would later become allies.

Venom appeared in Season 4 of DBX, where he fought against Spawn from the series of the same name and lost. 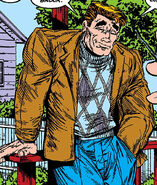 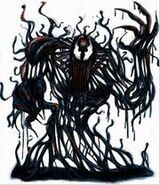 Venom gliding through the air 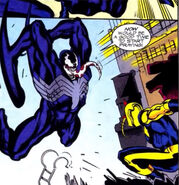 Venom morphing his arms into spikes

Venom's Webbing
Add a photo to this gallery

Retrieved from "https://deathbattle.fandom.com/wiki/Venom?oldid=1081181"
Community content is available under CC-BY-SA unless otherwise noted.