Venusaur is a creature from the Pokémon series. It appeared in the 33rd episode of DEATH BATTLE!, the Pokémon Battle Royale, where it fought against fellow Starter Pokémon Blastoise and Charizard.

Venusaur is a Grass/Poison type Pokémon and the final evolution of the Kanto Starter Bulbasaur. While they are rare, they have mostly been seen protecting grasslands from danger.

They absorb sunlight through the flower on their back, and can use it as either nutrition or as a powerful weapon in the shape of a Solar Beam. However, it mostly prefers to calm its enemies down with the scent of its flower. 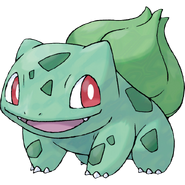 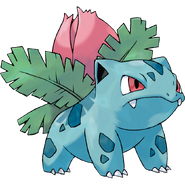 Sleep Powder
Add a photo to this gallery

Retrieved from "https://deathbattle.fandom.com/wiki/Venusaur?oldid=890967"
Community content is available under CC-BY-SA unless otherwise noted.