Voltron, piloted by the Voltron Lion Force, is the main protagonist of the series of the same name. It appeared in the 75th episode of DEATH BATTLE!, Power Rangers VS Voltron, where it fought against the Megazord from the Power Rangers series.

In 1999, the planet of Arus is subdued and enslaved by the Drule Empire. Five space pilots sent by the Galaxy Alliance travelled to Arus, only to find it devastated by the empire's forces. Eventually, the explorers are captured and enslaved, and forced to fight for their lives in Emperor Zarkon's arena. The young pilots escape and eventually land on the planet Altea, where they discover the secret of the mighty sentient robot Voltron, the only weapon powerful enough to defeat Emperor Zarkon's forces. Thousands of years ago, Voltron was created through a combination of science and magic. However, the witch Haggar cast a spell that split Voltron into five robotic lions, removing its sentience in the process. Now, the five pilots must control the five lions and use them to reform Voltron, letting them defeat Zarkon once and for all.

The five pilots consisted of the leader Keith Kogane, the second-in-command Sven Holgersson, the hot-headed ace flier Lance McClain, the muscle Tsuyoshi "Hunk" Garrett, and the young genius Darrell "Pidge" Stoker. After Sven's death/incapacitation (depending on the dub), he is replaced by the Altean Princess, Allura.

Note: These are the Voltron Lion Force's quotes. 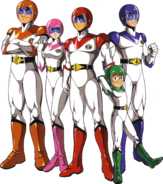 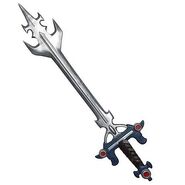 Spinning Laser Blades
Add a photo to this gallery

Retrieved from "https://deathbattle.fandom.com/wiki/Voltron?oldid=1029035"
Community content is available under CC-BY-SA unless otherwise noted.