James "Rhodey" Rhodes, AKA War Machine, is a superhero from Marvel Comics. He appeared in the 123rd episode of DEATH BATTLE!, Genos VS War Machine, where he fought against Genos from the One-Punch Man series.

On a mission he was blasted out of the sky by enemy rockets, Rhodey managed to land in one piece and was attempting to get his craft airworthy when inventor Tony Stark aka Iron Man was trying to make his way to the American defense perimeter. Attacked by enemies, the two teamed up to destroy the base and flew to the nearest American encampment. Before leaving Afghanistan for the United States, Stark offered Rhodey a job as a pilot as soon as his military stint was over.

After a succession of other jobs, Rhodey finally accepted Stark's offer and became his personal pilot and chief aviation engineer. While working at Stark Industries, Rhodey aided Iron Man in his battles against such foes as the Roxxon Oil Company, Justin Hammer, and the Dreadnoughts. Several years later, Tony Stark "died," and Rhodes was named CEO of Stark Enterprises. It was at this time that Stark Enterprises created the War Machine armor and Rhodes briefly took the place of Iron Man (even replacing him in the Avengers West Coast). 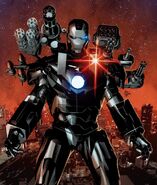 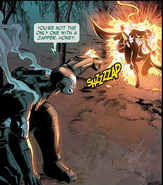 Iron Patriot Armor
Add a photo to this gallery

Retrieved from "https://deathbattle.fandom.com/wiki/War_Machine?oldid=1077166"
Community content is available under CC-BY-SA unless otherwise noted.