Weiss Schnee is one of the main protagonists of the RWBY series. She appeared in the 110th episode of DEATH BATTLE!, Weiss VS Mitsuru, where she fought against Mitsuru Kirijo from the Persona series.

As the heiress of the vastly influential Schnee Dust Company, Weiss grew up in a very broken family as her father only married her mother for the riches. Striving to be the best, Weiss took up singing and combat thanks to her older sister, Winter, who taught her the family's Semblance of glyphs and summoning. Determined to escape her father's control, she left for Beacon Academy where she met Ruby, Blake and Yang, who would be part of Team RWBY. Despite the rough introductions, Weiss managed to get along with her new friends.

After the Fall of Beacon, Weiss was sent back to her father's, but eventually left in order to rejoin her sister in Mistral, only to rejoin her teammates in their fight against Salem. 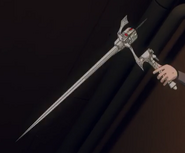 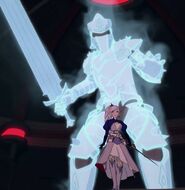 Weiss with Arma Gigas
Add a photo to this gallery

Retrieved from "https://deathbattle.fandom.com/wiki/Weiss_Schnee?oldid=1073794"
Community content is available under CC-BY-SA unless otherwise noted.