Amélie Lacroix, AKA Widowmaker, is an antagonist from the Overwatch series. She appeared in the 106th episode of DEATH BATTLE!, Black Widow VS Widowmaker, where she fought against Black Widow from Marvel Comics.

Widowmaker's real name is Amélie Lacroix and she was married to an Overwatch member called Gérard Lacroix, who led operations against the terrorist group known as Talon. The group tried many times to kill Gérard but were unsuccessful. They then decided to kidnap Amélie and subjected her to a brainwashing program that transformed her into a killer. Amélie killed Gérard and was later returned to Talon so that the process of turning her into a living weapon could be complete. Once it was done, she became an unfeeling and merciless Talon agent, and her name was changed to Widowmaker. 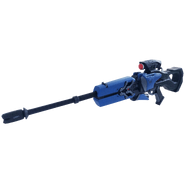 Grappling Hook
Add a photo to this gallery

Retrieved from "https://deathbattle.fandom.com/wiki/Widowmaker?oldid=1074116"
Community content is available under CC-BY-SA unless otherwise noted.