James "Bucky" Barnes, AKA Winter Soldier, is an anti-hero from Marvel Comics. He appeared in the 133rd episode of DEATH BATTLE!, Winter Soldier VS Red Hood, where he fought against Red Hood from DC Comics.

James Buchanan "Bucky" Barnes was orphaned when his father was killed in training at an Army Camp just before World War II began and was unofficially adopted by the camp as a mascot. When Steve Rogers visited his camp, he discovered that Steve was the superhero Captain America and insisted on becoming Steve's partner. After many missions together, the two heroes supposedly perished while attempting to stop Baron Zemo's deadly scheme in the final days of World War II.

While Steve was hurled into the freezing waters of the Atlantic and eventually discovered by the Avengers, a Russian patrol submarine found Bucky's body with his left arm severed. Bucky was revived in Moscow, but suffered from amnesia. The scientists attached a bionic arm to him and programmed him to be a Soviet assassin for Department X—under the code name "Winter Soldier". For decades, he was sent on covert missions and became increasingly ruthless and efficient as he killed in the name of the state.

When Steve eventually discovered what happened to Bucky, he used the Cosmic Cube to restore his former sidekick's memories. Overwhelmed with guilt, Bucky began fighting for justice once more and began the long path towards redemption for his years as a Soviet assassin.

Bucky as a kid 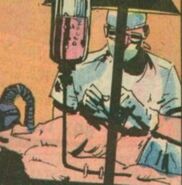 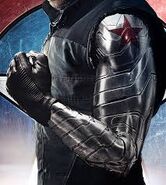 Paratrooper SAW machine gun
Add a photo to this gallery

Retrieved from "https://deathbattle.fandom.com/wiki/Winter_Soldier?oldid=1095988"
Community content is available under CC-BY-SA unless otherwise noted.