James "Logan" Howlett, AKA Wolverine, is an anti-hero from Marvel Comics. He appeared in the 52nd DEATH BATTLE!, Wolverine VS Raiden, where he fought against Raiden from the Metal Gear series.

Born in the 1800's, Wolverine's 100+ year life has been filled with love, misery, and death. Having been experimented on by the Weapon X program, which coated his bones in adamantium and nearly erased all of his memories, Wolverine has spent years trying to piece it all together.

After fighting The Hulk, Wolverine decided to join the X-Men, where he battled for the dream that humans and mutants could co-exist in peace. Wolverine has also been a member of the Avengers as well.

During Deadpool VS Pinkie Pie, a poster of the comic cover of "X-Men #100" featuring Wolverine can be seen in the background on the set of DEATH BATTLE! Cast during Deadpool's invasion of the show.

Wolverine appeared in Season 2 of DBX, where he fought against Raphael from the Teenage Mutant Ninja Turtles series and won.

He returned in Season 3, where he fought against 100 Barakas from the Mortal Kombat series and won.

Wolverine appeared in Season 6 of One Minute Melee, where he fought against fellow Marvel hero Black Panther and lost. 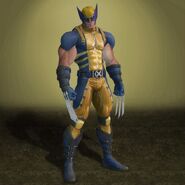 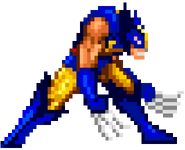 Sprite used in One Minute Melee and DBX Season 3

Wolverine with his claws out

Berserker Rage
Add a photo to this gallery

Retrieved from "https://deathbattle.fandom.com/wiki/Wolverine?oldid=1074260"
Community content is available under CC-BY-SA unless otherwise noted.