Diana was a member of a tribe of women named the Amazons, native to Paradise Island – a secluded island set in the middle of a vast ocean. After Captain Steve Trevor's plane crashes on the island, he is found alive but unconscious by Diana and a fellow Amazon. Diana has him nursed back to health and falls in love with him. A competition is held amongst all the Amazons by Diana's mother, the Queen of the Amazons Hippolyta, in order to determine who is the most worthy of all the women; Hippolyta charges the winner with the responsibility of delivering Captain Steve Trevor back to man's world and to fight for justice. Hippolyta forbids Diana from entering the competition, but she takes part nonetheless, wearing a mask to conceal her identity. She wins the competition and reveals herself, surprising Hippolyta, who ultimately gives in to Diana's wish to go to Man's World. She then safely returns Steve Trevor back to his home and is awarded a special dress made by her mother for her new role as Wonder Woman.

Wonder Woman can be seen during Deadpool VS Mask in one of the alternate realities that was shown in the background when Deadpool was using the Continuity Gem. Instead of Rogue grabbing onto Wonder Woman's arm, Wonder Woman punched through Rogue's face.

Wonder Woman appears on a photo in the background of Winter Soldier VS Red Hood.

Wonder Woman appeared in Season 2 of One Minute Melee, where she fought against Lightning from the Final Fantasy series and lost. 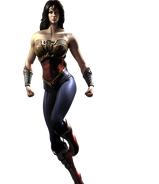 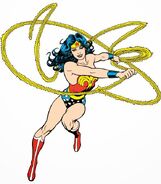 The Lasso of Truth

The Bracelets of Submission 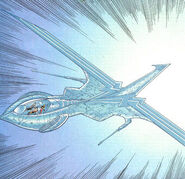 Without bracelets
Add a photo to this gallery

Retrieved from "https://deathbattle.fandom.com/wiki/Wonder_Woman?oldid=1082037"
Community content is available under CC-BY-SA unless otherwise noted.