Master Yoda is a protagonist from the Star Wars series. He appeared in the 140th episode and Season 8 Premiere of DEATH BATTLE!, Yoda VS King Mickey, where he fought against King Mickey from the Kingdom Hearts series.

Yoda is the Grand Master of the Jedi Order during the waning days of the Galactic Republic and its fall following the rise of the Galactic Empire. A force-sensitive being belonging to a mysterious species, though diminutive in size, Yoda was revered by all for his great wisdom, kindness, and adherence to the Jedi Code as well as his fearsome prowess on the battlefield in both lightsaber combat as well as his use of the Force. The mentor to many great Jedi, he serves as the Order's guiding light during its times of turmoil, as well as one of its last surviving remnants during the time of the Galactic Empire, training Luke Skywalker in the ways of the Force after the death of Ben Kenobi.

Use of Form IV - Ataru 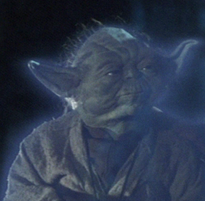 Force Ghost
Add a photo to this gallery

Retrieved from "https://deathbattle.fandom.com/wiki/Yoda?oldid=1129400"
Community content is available under CC-BY-SA unless otherwise noted.