Yoshi is the main protagonist of the series of the same name, as well as a protagonist from the Super Mario series. He appeared in the 8th episode of DEATH BATTLE!, Yoshi VS Riptor, where he fought against Riptor from the Killer Instinct series.

A denizen of Yoshi's Island, he has helped Mario on several occasions, and both have learned over time to work with one another. He is among the race of Bowser's worst enemies, due to the fact that they are happy. He has participated in a number of sports, fighting, and Mario Party.

Yoshi made a cameo at the beginning of Mario VS Luigi, where he, Princess Peach and Toadsworth watched the two Mario Bros. play tennis, until Mario became angry and attacked Luigi, which accidentaly hit Yoshi, who was standing next to Luigi at the time.

He later appeared in Season 3, where he fought against Pac-Man from the series of the same name and lost.

He later made a cameo appearance in the beginning of the Season 4 Finale of DBX, Batman VS Iron Man, where he can be seen in the crowd during the auction. 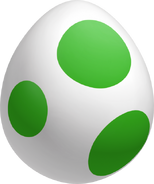 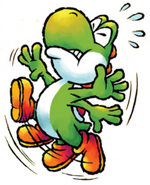 How Yoshi Makes Eggs
Add a photo to this gallery

Retrieved from "https://deathbattle.fandom.com/wiki/Yoshi?oldid=1073543"
Community content is available under CC-BY-SA unless otherwise noted.