Zero is one of the main protagonists of the Mega Man X series. He appeared in the 79th episode of DEATH BATTLE!, Metal Sonic VS Zero, where he fought against Metal Sonic from the Sonic the Hedgehog series.

Zero was created by the late Dr. Wily to be his ultimate creation, surpassing both Bass and Mega Man. However, Zero had an error in his programming, making him violent and unwilling to obey orders, so he and the Maverick Virus, an advanced version of Roboenza, were sealed away by Wily in a capsule. Decades later, a group of Reploids would find Wily's lair and free Zero, only for him to destroy them and everyone who would dare to enter Wily's secret hideout. It took Sigma, who got infected with the virus during their battle, to destroy Zero's gem on his head and some reparations from Dr. Cain for Zero to finally join the Maverick Hunters.

Zero appeared in Season 1 of One Minute Melee, where he fought against Meta Knight from the Kirby series and won. He also made a cameo in a test tube in the background of M. Bison VS God Rugal.

He reappeared in Season 6, where he fought against Noctis Lucis Caelum from the Final Fantasy series and lost.

Zero appeared in Season 2 of DBX, where he fought Strider Hiryu from the Strider series and won. 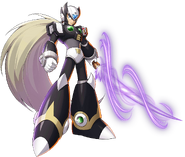 Absolute Zero
Add a photo to this gallery

Retrieved from "https://deathbattle.fandom.com/wiki/Zero?oldid=1074168"
Community content is available under CC-BY-SA unless otherwise noted.