Morgan Ziegler, AKA Zitz, is one of the main protagonists of the Battletoads series. He appeared in the 7th episode of DEATH BATTLE!, Zitz VS Leonardo, where he fought against Leonardo from the Teenage Mutant Ninja Turtles series.

Zitz was computer engineered as one of three ultimate amphibian warriors in a gladiatorial video game reality show called Battletoads. This action accidentally opened a dimensional gateway to another galaxy. Every time the game began, the galaxy became the battletoad arena for their superhero war against The Dark Queen. 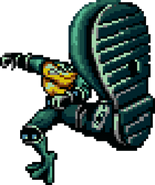 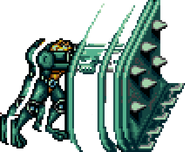 Zitz's Bulldozer
Add a photo to this gallery

Retrieved from "https://deathbattle.fandom.com/wiki/Zitz?oldid=1074181"
Community content is available under CC-BY-SA unless otherwise noted.